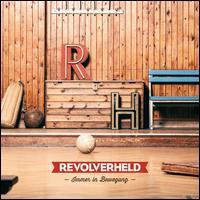 A product of Germany's Neue Deutsche Welle punk revival, Revolverheld formed in Hamburg in the summer of 2003. Originally dubbed Manga, the lineup comprised frontman Johannes Strate, guitarists Kristoffer Hünecke and Niels Grötsch, bassist Florian Speer, and drummer Jakob Sinn. After adopting the name Tsunamikiller in 2004, the band quickly abandoned the moniker after a tsunami claimed thousands of lives in Thailand at year's end. As Revolverheld, the quintet toured in support of acts including Donots, Silbermond, and Udo Lindenberg before signing to Sony BMG in early 2005, issuing its self-titled debut LP that autumn. The second single, "Die Welt Steht Still," proved a Top 20 hit, and the third, "Freunde Bleiben," was selected to represent Germany in the annual Eurovision Song Contest. In 2006 they released their second studio album Chaostheorie. A success for the band, it spawned three singles "Ich Werd die Weld Verandern," "Du Explodierst" and "Unzertrennlich." Their third studio album, In Farbe, was released in 2010 and saw a collaboration with Die Happy singer Marta Jandova on the track "Halt Dich an mir Fest." In 2012, Florian Speer left Revolverheld, and Chris Rodriguez signed on as the group's new bassist; the new lineup of the band made their recording debut with the album Immer in Bewegung, released in 2013. ~ Jason Ankeny, Rovi