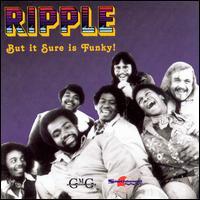 An interracial Michigan soul-funk band, Ripple had an R&B hit in 1973 with "I Don't Know What It Is but It Sure Is Funky," and made several other recordings for the GRC label in the mid-'70s. They were an eclectic hodgepodge of influences circulating in soul music at the time -- sometimes they can sound like a more pop-inclined version of Kool & the Gang, other times they sound like a less distinctive variant of Stevie Wonder. Their brand of funk was neither too raw nor too slick, with liberal pop and jazz influences. Those who like just-pre-disco funk will probably enjoy the group, though their talents were not truly impressive. ~ Richie Unterberger, Rovi