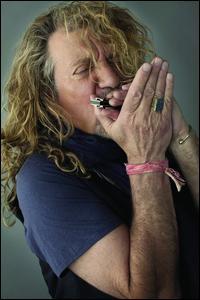 Member of: Led Zeppelin, The Honeydrippers, Band of Joy, Priory Of Brion

In 1968, a naïve young singer from the Black Country hills in England named Robert Plant was discovered wailing the blues by veteran session guitarist Jimmy Page and bassist/keyboardist John Paul Jones. When Plant recommended his friend John Bonham as the drummer, one of the most successful bands in rock history was born as Led Zeppelin. But the group that started with such force also ended in flames after 12 years, as Bonham's death from alcohol poisoning in 1980 split the band after nine albums. The remaining members went their separate ways, but Bonham's death hit Plant particularly hard. Starting his solo career in 1982 with his Zeppelin-like Pictures at Eleven album, Plant would use a slew of great drummers over the next few years, including Phil Collins, Cozy Powell, Barriemore Barlow, and Richie Hayward. Collins appeared on the 1983 follow-up, The Principle of Moments, and Plant achieved a lighter touch somewhere between Genesis and Zeppelin's quieter side with tracks like "In the Mood" and "Big Log." But the singer would feed his Elvis Presley infatuation on 1984's The Honeydrippers, Vol. 1, teaming with Page and other guests on influential roots rock material.

Refusing to be typecast, Plant then threw a major curve with Shaken 'n' Stirred, the 1985 album that approximated new wave through the synthesizer embellishments of keyboardist Jezz Woodroffe and guitarist Robbie Blunt, plus Hayward's use of electronic drums. It was a creative highlight of his career, but despite a hit in "Little by Little," the album sold poorly, and the rumblings about a Zeppelin reunion mounted. Plant took the next few years off, then answered the call for Zeppelin material with 1988's Now & Zen, which featured samples from his old group (plus selections from its vault on the subsequent tour). Manic Nirvana furthered the post-Zeppelin theme in 1990, and Plant's 1993 CD Fate of Nations proved another artistic high point and found Plant singing Page's name on the hit "Calling to You." The old songwriting partners had gotten together again for special occasions with Jones and drummers like Collins and Bonham's son Jason, but organized a different reunion in 1994. Plant brought in his bassist, Charlie Jones, and touring drummer, Michael Lee, to back the singer and Page -- who added a British symphony orchestra and Middle Eastern musicians for their televised No Quarter concert and CD. Despite Plant blocking John Paul Jones from participating (the two had disagreed throughout their careers), the show proved a fascinating blend of different cultures tackling Zeppelin classics like "Since I've Been Loving You" and "Gallows Pole."

As the versatile John Paul Jones made a name for himself as a producer (of groups as disparate as Heart and the Butthole Surfers) as well as solo artist, Robert Plant and Jimmy Page further stirred the ashes with their 1998 studio CD, Walking into Clarksdale. But the quartet format (with Charlie Jones and Michael Lee) paled in comparison to Zeppelin's similar blend of bombast and subtlety, and poor sales put Plant back at the crossroads of his 35-year career. He stayed away from recording until late 2001, when he stepped into the studio with a batch of original material and a few well-chosen covers and recorded Dreamland. Taking his penchant for experimenting with ethnic musics and blending it with a softer approach to his bluesy pop, he steered in another interesting direction almost 40 years into his recording career. In November 2003, Atlantic issued Sixty Six to Timbuktu, a two-disc compilation dedicated exclusively to Plant's solo work. The set ranged from hits like 1988's "Tall Cool One" and the Honeydrippers favorite "Sea of Love" to the previously unissued "Upside Down" and a pre-Zeppelin single dating from 1966. Mighty Rearranger followed two years later, and Plant teamed up with bluegrass icon Alison Krauss to release the Grammy-winning collaborative album Raising Sand in 2007. Plant next revived the name of his first band, Band of Joy, in 2010 for the self-titled Band of Joy release, which was co-produced by Buddy Miller. ~ Bill Meredith, Rovi