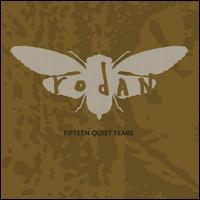 A seminal influence on the avant-garde wing of indie rock, Rodan were habitually likened to fellow Louisville natives and math rock pioneers Slint. And it was true that Slint was a crystal-clear influence on the group's loud, angular art-punk -- easily heard in the extreme dynamic shifts, deliberate tempos, lengthy compositions, and half-spoken vocals. Yet Rodan put their own stamp on the basic blueprint, ratcheting up the energy and writing fuller, more complex arrangements. In doing so, they helped codify the pummeling yet intellectual aesthetic of what was soon dubbed math rock: textured, patterned soundscapes built on the controlled, precise use of abrasive noise and high volume. Although Rodan's existence was short, producing only one album in 1994's Rusty, their impact on math rock and post-rock was far-reaching. Rusty received highly positive reviews and fairly widespread press attention, quickly turning the group into a cult phenomenon. Surprisingly, they elected to disband by the end of 1994, perhaps overwhelmed by the response. Rodan's early breakup only served to enhance their cult reputation, as did the bandmembers' subsequent projects, which were often just as challenging, whether they resembled Rodan's musical modus operandi or not. Guitarist Jason Noble founded the post-rock chamber trio Rachel's; fellow guitarist Jeff Mueller founded the similar-sounding math rock band June of 44; bassist Tara Jane O'Neil played with indie popsters Retsin and with Rodan drummer Kevin Coultas in the Sonora Pine. In 2012, the music world received the sad news that Jason Noble passed away at the age of 40 after a three-year battle with a synovial sarcoma, a rare form of cancer. The following year, Quarterstick Records released Fifteen Quiet Years, a collection of out-of-print studio material, BBC sessions, and unreleased live recordings. ~ Steve Huey, Rovi