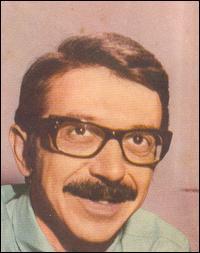 The award-winning composer/arranger Rogério Duprat is primarily known for his fundamental influence over the Tropicalia movement. But, he also is a successful composer of over 40 movie soundtracks, having also arranged music for several artists.

Beginning with cello lessons from Calisto Corazza, in 1953 he joined the Orquestra Sinfônica Estadual. In that period, Duprat studied harmony, counterpoint, and composition with Olivier Toni and the renowned Brazilian composer Cláudio Santoro. In 1955, he joined the Orquestra Sinfônica Municipal de São Paulo. In 1956, Duprat founded the Orquestra de Câmara de São Paulo, acting as its director and also a cellist. At that time, he was active as a composer for cinema, TV, and theater. In 1962, Duprat moved to Europe, together with Júlio Medaglia and Damiano Cozzella, where he studied with Pierre Boulez, in France, and Karlheinz Stockhausen, in Germany -- he was in the same class as Frank Zappa. In 1963, together with composers Régis Duprat, Júlio Medaglia, Sandino Hohagem, Damiano Cozzella, Willy Correia de Oliveira, Gilberto Mendes, and Olivier Toni, all of whom were deeply involved with modern experimentations in avant-garde music, launched the Música Nova manifest. The document proposed, among other things, an understanding of art as part of the cultural industry, an abolition of nostalgia, and the necessity of engaged art in people's lives. The music produced within the movement remains modern after almost four decades after its creation.

In 1963, together with Cozzella, Rogério Duprat decided to compose computer music on an old IBM 1620, being attacked both by popular and avant-garde composers. He also was hired by TV Excelsior as an arranger and conductor, staying there until the next year. In 1964, his soundtrack for Walter Hugo Khory's movie A Ilha was awarded with several prizes. In 1965, he joined the concretista poet Décio Pignatari in the formation of the irreverent MARDA movement, which had fun paying "tribute" to bad-taste monuments in the city of São Paulo. A professor of the renowned University of São Paulo, he, together with more than 130 professors and another number of assistants and technicians, resigned after the military dictatorship's Army took over the campus. In 1965, his soundtrack for Walter Hugo Khouri's movie Noite vazia won awards. In 1966, unemployed and looking for new artistic expressions, he was introduced by Medaglia to Gilberto Gil; who invited him to write the arrangements for his song "Domingo No Parque," to be presented in the next TV Record Festival (1967). That work would yield him an award as the best arranger of that festival, which was created especially due the song's exceptional quality, and also the Roquette Pinto trophy as the best arranger of the year. In 1966, he also was awarded for his work composing soundtracks for the movies Corpo Ardente (Walter Hugo Khouri) and As Cariocas (Walter Hugo Khouri, Fernando de Barros, and Roberto Santos).

In 1968, Duprat wrote the arrangements for Gilberto Gil's album Gilberto Gil, when both Gil and Caetano were arrested. The album was an attempt to avoid violence against them, as they would be connected with the broader society. The vocals were recorded in prison, with the two playing their own accompaniment on the violão along with a metronome and the rest of the instruments added later, subverting the basics of production. Also, Duprat wrote the arrangements for the collective-album/Tropicalia-manifest Tropicália ou Panis et Circensis. He is the one holding a chamber pot on the album's cover as if it were a tea cup, together with the major names of Tropicalia. In that same year, he was the artistic director of another Tropicalia act, the show Momento 68 (which toured Brazil and South America), and wrote all arrangements for Nara Leão's album Nara Leão. In the same year, he won the Galo de Ouro trophy, presented at TV Globo's III FIC, for his arrangements on Caetano's "É Proibido Proibir"; and the André Kostelanetz Trophy, for his arrangements for Caminhante Noturno. Also in that year, Duprat was the musical director for the famous Tropicalia show Divino Maravilhoso, and toured Europe with the Os Mutantes. During TV Record's IV FMPB, Os Mutantes performed with Dom Quixote, arranged by Duprat, such "nationalistic" instruments as a mule's peccary (an obvious irony directed toward xenophobic critics). In 1969, he wrote the arrangements for Caetano's album Caetano Veloso, and, in 1973, for Araçá Azul. In 1987, Duprat wrote the soundtrack for the movie Marvada carne (André Klotzel), which was awarded at the XVIII Festival de Cinema de Gramado with the Kikito Prize for best original soundtrack. In 1997, he was the subject of the documentary Rogério: Vida de Músico, featuring exclusive footage and interviews with Caetano Veloso, Gilberto Gil, Chico Buarque, Quarteto de Cordas do Município de São Paulo, Orquestra Sinfônica de Tatuí, Grupo Experimental de Música Nova de Santos, Rita Lee, and the former members of Os Mutantes, among others. ~ Alvaro Neder, Rovi