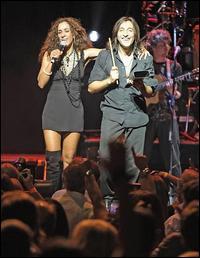 A celebrated actress as well as a popular singer, Rosario became one of Spain's premier media stars in the mid-'90s, and her celebrity continued in the years that followed. Though better known by her full name, Rosario Flores, she bills herself simply as Rosario on her albums. The daughter of Antonio González (aka El Pescaílla), a musician, and Lola Flores, a dancer, singer, and actress, and the sister of Lolita Flores, an actress, and Antonio Flores, a singer/songwriter, Rosario was born on November 4, 1963, in Madrid. She began her career in the mid- to late '70s; billing herself then as Rosario Rios, she recorded ¿Que Querrá Decir Esto? (1976) for CBS and acted in the film Al Fin Solos, Pero... (1977). Not much came of her efforts during this period, and her career went cold until 1984. In that year she acted in a made-for-TV Spanish miniseries, Proceso a Mariana Pineda, and recorded another album for CBS, Vuela de Noche.

Rosario continued acting in the years that followed, but didn't record another album until 1992, when Sony Discos released De Ley. Co-written by her brother Antonio, De Ley was a major success in Spain, spinning off a couple big hits ("Mi Gato" and "Sabor Sabor") and warranting a follow-up. Siento (1995) proved to be an even greater success, and not just in Spain, for its hits ("Estoy Aquí," "La Estrella") charted internationally. Like before, most of the album was co-written by Antonio. For the successive album, Mucho por Vivir (1996), Rosario either wrote or co-wrote the songs herself, with notable input from one of her co-producers, Fernando Illán. Mucho por Vivir didn't match the success of Siento, but it did manage one major hit, "Yo Te Daré," that charted internationally. Rosario's next album, Jugar a la Locura (1999), again found her penning the songs herself. Also of note, Jugar a la Locura showcases an electronic production style that was very trendy for its time; however, this didn't amount to commercial gain, as the album met a lukewarm reception, furthering the slide in popularity for her that had begun an album earlier with Mucho por Vivir.

Consequently, Rosario surrendered some of the control over her next album, Muchas Flores (2001), to professionals, most renowned among them singer/songwriter Jorge Drexler and producer Cachorro López. The end result was ideal, as Muchas Flores became a hit with critics as well as consumers. This grand comeback rejuvenated Rosario's career as an actress, in addition to her recording career; the following year, she appeared as Lydia González in Hable con Ella (2002), an acclaimed film by legendary Spanish director Pedro Almodóvar. The role was a major one, and it capped off Rosario's return to celebrity. In the following years, she continued her singing career, recording successful albums such as De Mil Colores (2004) and Contigo Me Voy (2006) for Sony. Her efforts were recognized by the Latin Grammy voters, who regularly nominated her for Best Pop Vocal Album, Female: she won in 2002 and 2004, for Muchas Flores and De Mil Colores, respectively, and though she didn't win in 2006 for Contigo Me Voy, she was nominated. Rosario returned in 2008 with her seventh album, Parte di Mí, paying tribute to some of her musical inspirations including her mother, Lola Flores. Followed by 2009’s Cuéntame, Rosario delivered her ninth studio album, Raskatriski in2011.~ Jason Birchmeier, Rovi