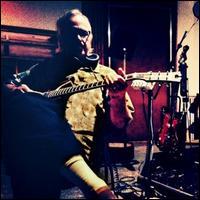 Whether serving as a session musician, solo artist, or soundtrack composer, Ry Cooder's chameleon-like fretted instrument virtuosity, songwriting, and choices of material encompass an incredibly eclectic range of North American musical styles, including rock & roll, blues, reggae, Tex-Mex, Hawaiian, Dixieland jazz, country, folk, R&B, gospel, and vaudeville. The 16-year-old Cooder began his career in 1963 in a blues band with Jackie DeShannon and then formed the short-lived Rising Sons in 1965 with Taj Mahal and Spirit drummer Ed Cassidy. Cooder met producer Terry Melcher through the Rising Sons and was invited to perform at several sessions with Paul Revere & the Raiders. During his subsequent career as a session musician, Cooder's trademark slide guitar work graced the recordings of such artists as Captain Beefheart (Safe as Milk), Randy Newman, Little Feat, Van Dyke Parks, the Rolling Stones (Let It Bleed, Sticky Fingers), Taj Mahal, and Gordon Lightfoot. He also appeared on the soundtracks of Candy and Performance.

Cooder made his debut as a solo artist in 1970 with a self-titled album featuring songs by Leadbelly, Blind Willie Johnson, Sleepy John Estes, and Woody Guthrie. The follow-up, Into the Purple Valley, introduced longtime cohorts Jim Keltner on drums and Jim Dickinson on bass, and it and Boomer's Story largely repeated and refined the syncopated style and mood of the first. In 1974, Cooder produced what is generally regarded as his best album, Paradise and Lunch, and its follow-up, Chicken Skin Music, showcased a potent blend of Tex-Mex, Hawaiian, gospel, and soul, and featured contributions from Flaco Jimenez and Gabby Pahinui. In 1979, Bop Till You Drop was the first major-label album to be recorded digitally. In the early '80s, Cooder began to augment his solo output with soundtrack work on such films as Blue Collar, The Long Riders, and The Border; he has gone on to compose music for Southern Comfort, Goin' South, Paris, Texas, Streets of Fire, Alamo Bay, Blue City, Crossroads, Cocktail, Johnny Handsome, Steel Magnolias, and Geronimo. Music by Ry Cooder (1995) compiled two discs' worth of highlights from Cooder's film work.

In 1992, Cooder joined Keltner, John Hiatt, and renowned British tunesmith Nick Lowe, all of whom had played on Hiatt's Bring the Family, to form Little Village, which toured and recorded one album. Cooder turned his attention to world music, recording the album A Meeting by the River with Indian musician V.M. Bhatt. Cooder's next project, a duet album with renowned African guitarist Ali Farka Touré titled Talking Timbuktu, won the 1994 Grammy for Best World Music Recording.

His next world crossover would become one of the most popular musical rediscoveries of the 20th century. In 1997, Cooder traveled to Cuba to produce and play with a group of son musicians who had little exposure outside of their homeland. The resulting album, Buena Vista Social Club, was a platinum-selling international success that made stars of Compay Segundo, Ibrahim Ferrer, and Rubén González, and earned Cooder another Grammy. He continued to work on projects with his Buena Vista bandmates, including a collaboration with Manuel Galbán in 2003 titled Mambo Sinuendo. His other work in the 2000s included sessions with James Taylor, Aaron Neville, Warren Zevon, and Spanish diva Luz Casal.

In 2005, Cooder released Chavez Ravine, his first solo album since 1987's Get Rhythm; the album was the first entry in a trilogy of recordings about the disappearance of Los Angeles' cultural history as a result of gentrification. Chavez Ravine was followed by My Name Is Buddy in 2007, and the final chapter in the saga, I, Flathead in 2009. In 2010, Cooder was approached by Paddy Moloney of the Chieftains to produce an album. Moloney had been obsessed with an historical account of the San Patricios, a band of immigrant Irish soldiers who deserted the American Army during the Mexican-American War in 1846 to fight for the other side, against the Manifest Destiny ideology of James Polk's America. Cooder agreed and the end result was San Patricio, which brings this fascinatingly complex tale to life. In early 2011, Cooder was taken by a headline about bankers and other moneyed citizens who'd actually profited from the bank bailouts and resulting mortgage and economic crisis, and wrote the song "No Banker Left Behind," which became the first song on 2011's Pull Up Some Dust and Sit Down, an album that reached all the way back to his earliest recordings for musical inspiration while telling topical stories about corruption -- political and social -- the erasure and the rewriting of American history, and an emerging class war. A month after its release, Beat poet Lawrence Ferlinghetti's fabled City Lights publishing house issued Cooder's first collection of short fiction entitled Los Angeles Stories. He continued to follow his socio-political muse with Election Special, released in the summer of 2012. In 2013, Cooder released Live in San Francisco, his first live album in 35 years, with Corridos Famosos (son Joachim on percussion, Flaco Jimenez on accordion, Robert Francis on bass, and vocalists Terry Evans, Arnold McCuller, and Juliette Commagere). The ten-piece Mexican brass band La Banda Juvenil also guested. ~ Steve Huey, Rovi