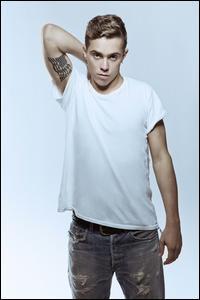 Mixing Shwayze-like beats, the caustic attitude of Ke$ha, and a tough version of suburban rap, Boston's Sammy Adams caused quite a stir in 2010 when his debut album topped the iTunes hip-hop charts the week of its release. Sam Adams -- his real first and middle name -- was a senior at Trinity College in Hartford when he decided to inject some attitude into Asher Roth's hit "I Love College." With the results posted online under the name Sam Adams, his answer song, "I Hate College," made the rapper an Internet star in 2009. It was followed the next year by the underground mixtape Boston's Opening Day, plus his aboveground debut, the Boston's Boy EP. The EP debuted on top of iTunes' hip-hop charts, driven in part by the success of the single "Driving Me Crazy." He returned in 2013 with Homecoming, an album that officially changed his performing name to Sammy Adams in order to avoid any confusion with the Boston-based brewing company. ~ David Jeffries, Rovi