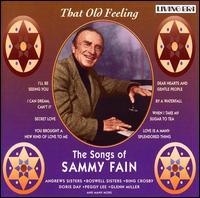 Oscar-winning songwriter Sammy Fain wrote successful pop hits and show tunes for Broadway and Hollywood from the 1920s through the 1950s. Born in N.Y.C. on June 17, 1902, Fain went on to become a prolific composer of traditional pop tunes that were oft-covered by vocalists through the decades. The composer got his start when he penned a successful song shortly after getting a job with Jack Mills as a song-plugging pianist. This first hit was 1924's "Nobody Knows What a Red Head Mamma Can Do." Other hits that followed include "Wedding Bells (Are Breaking Up That Old Gang of Mine)" (1929) and "You Brought a New Kind of Love to Me" (1930). Fain worked with many lyricists over the years, including Mitchell Parish, Irving Kahal, Jack Yellen, and E.Y. Harburg. He also worked with Lew Brown (of the famed Henderson-DeSylva-Brown songwriting team) with whom he co-wrote "That Old Feeling" (1937). It was sung by Virginia Verrill in the 1937 cinematic musical Vogues of 1938 and brought back, first by Peggy Lee, then again by songstress Jane Froman, who recorded it for the 1952 movie musical about Froman's life, With a Song in My Heart. Another 1930s song by Fain that was later revived is "I Can Dream, Can't I?" (1937), covered by the Andrews Sisters in 1949. Other songs penned by Fain which were used in productions include "Are You Having Any Fun?," sung by Ella Logan in George White's Scandals of 1939, and "I'll Be Seeing You" (1938), which was sung in the Royal Palm Review of WWII (with Rudy Vallee, Tony Martin, and more), and used again in the 1944 movie The Royal Palm Review. Sammy Fain's next hit came in 1949, when both Dinah Shore and Bing Crosby cut popular recordings of "Dear Hearts and Gentle People." A few years later, Fain got his first Oscar for the smash hit sung by Doris Day, "Secret Love" (1953), which sold over two-million copies. In 1955, Fain garnered his second Oscar for the film title song Love Is a Many Splendored Thing. The Four Aces also recorded this tune and it was a million seller. In the late '50s, Sammy Fain songs were recorded by artists including Pat Boone ("April Love" in 1957) and Johnny Mathis ("A Certain Smile" in 1958). ~ Joslyn Layne, Rovi