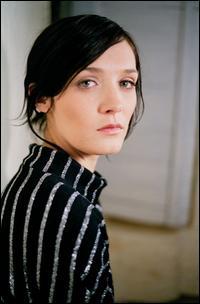 Australian songwriter Sarah Blasko arrived in the U.S. in 2005 with a pedigree that couldn't be ignored: trailing a list of ARIA Award nominations in the categories of Best Album, Best Female Artist, Best Breakthrough Artist, and Best Pop Release, she also distinguished herself -- and perked up the ears of rock skeptics -- by being tagged somewhere along her cross-continental journey with the moniker "Girliohead." The comparisons were not unfounded. Like Radiohead and the countless lovelorn, world-weary, too-smart-for-their-own-good British piano pounders that the band spawned, Blasko proved to be an appealing wallower. Her ethereal, at times Fiona Apple-like voice rode the gentle arrangements on her debut full-length, The Overture & the Underscore, taking care never to redirect them, and her lyrics evoked an atmospheric grace that burrowed into the mind's dark recesses. Blasko's head space was apparently the kind that's allergic to daylight.

Raised by missionary parents, Blasko sang her first songs in church alongside her tone-deaf mother, but the influences that came across more readily in her music derived from the '80s radio and television she heard as a child: Prince, David Bowie, and Eurythmics. Those popular acts, combined with the composers her professor father introduced her to -- Rachmaninov, Schubert, and Bach -- formed a pleasing musical jumble she would later pick apart and repackage into digestible, brainy pop. In high school, Blasko led a jazz- and blues-influenced band with her sister that soon dissolved; other bands followed, but within the space of a few years Blasko was determinedly a solo act, and also something of a homebody.

An introductory EP, the six-song Prelusive, arrived in 2004 and was routinely referred to as "homespun." But its promise propelled Blasko, who returned later that year with the full-length The Overture & the Underscore and, after racking up fans in Australia, pulled up stakes and landed in Hollywood. After the disc's 2005 release in America, Blasko embarked on tours with the likes of Ray LaMontagne and Martha Wainwright. Her second full-length album, What the Sea Wants, the Sea Will Have, was released in Australia in 2006, debuting at number seven on the ARIA chart. Two years later, she decamped to Sweden and began working with Björn Yttling, who produced 2009's As Day Follows Night -- the album was released in another edition a year later in 2010, packaged with Live at the Forum. ~ Tammy La Gorce, Rovi