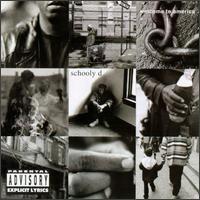 Opinion has been widely mixed about the merits of Philadelphia rapper Jesse B. Weaver, Jr. aka Schoolly D. Long before the debate about gangsta rap lyrics became an easy way to get national newsprint, there was outrage over Schoolly D's explicit and undiluted narratives on inner city strife. Saturday Night in 1987 and Smoke Some Kill in 1988 had city officials openly endorsing removal of the albums from record stores. He has continued in the same vein with 1993's Am I Black Enough for You and 1996's Gangster's Story. Schoolly D's rather lackluster rapping style and repetitive material doesn't place him in the forefront of hip-hop creators, but he does merit mention (or blame, depending on your perspective) for being an early gangsta proponent. His career got a bit of a boost after the Chemical Brothers sampled him on their 1997 Dig Your Own Hole album, creating a bit of interest in a rapper few of the late '90s youth were familiar with. Furthermore, Schoolly D's relationship with esteemed film director Abel Ferrara gave him the opportunity to collaborate on the soundtracks to several of the directors films such as The Addiction and Kings of New York. In late 2000, the rapper released his Funk 'N Pussy album, trying to re-ignite his faltering career. ~ Ron Wynn, Rovi