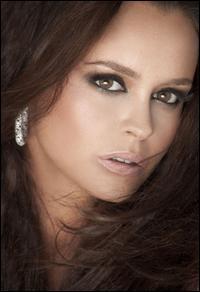 Spanish vocalist Shaila Dúrcal was born to parents Rocio Dúrcal and Antonio Morales, both towering figures in Spanish music. Shaila was the youngest of three, and was the only one among the siblings who would choose a career in music. From the age of three it became clear that she had the desire and talent to become a singer. She grew up listening to a wide variety of music, from Earth, Wind & Fire to rancheras and flamenco. At 12 years of age Shaila made her television debut, singing with Nikka Costa on the program Noches. She began to take her craft seriously, and studied voice in Madrid until the age of 17, when her mother, Rocio, invited Shaila to accompany her on her tour. Shaila began traveling with her mother, both learning the ropes of the game and acting as one of Rocio's backup singers. At her mother's side she traveled all over Latin America, the States, and Europe, learning not only her mother's repertoire, but to read and react to an audience. Shaila soon made the difficult decision to strike out on her own as a solo artist. Relocating to Mexico, her record label's home base, she began working on what would be her debut release. Halfway through production, in March of 2006, Rocio died unexpectedly. It affected Shaila strongly, and she chose to dedicate her album to Rocio in honor of her, both as a person and as a musician. Recordando, Shaila's reworking of Rocio's more popular repertoire, came out in February of 2007 and was followed in 2008 by Tanto Amor. The singer's 2009 album Corazón Ranchero proved a first as it charted higher in Mexico than it did in Spain and was followed in 2011 by her fifth album, Asi. ~ Evan C. Gutierrez, Rovi