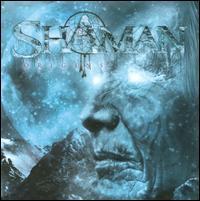 Formed in 2000, Brazil's Shaman deal in power metal that's aggressive, epic, and dramatic thanks to strong classical music and '80s metal influences. The band began when drummer and lifelong Rush fan Ricardo Confessori left São Paulo's popular metal outfit Angra. Two other Angra members -- vocalist Andre Matos and bassist Luis Mariutti -- followed the drummer, and when Luis' brother Hugo Mariutti joined they had their guitarist. After testing the band on the road with a tour of Europe and Latin America, they landed in Germany and began recording their debut with producer Sascha Paeth, a familiar face from the days with Angra. Finished and released in 2002, their album Ritual had them traveling the globe for the next year and a half supporting the release with their intense live show. In 2004 they documented a São Paulo show on the CD and DVD Ritual Live. The 2005 album Reason found them back with Paeth and back on the road again, but this time under the name Shaaman thanks to some confusion and legal problems with the Finnish metal band Shaman. When they returned home the problems continued when Confessori was left alone, as the Mariutti brothers began working with the band Henceforth along with helping Matos launch a solo career. Vocalist Thiago Bianchi, guitarist Léo Mancini, and bassist Fernando Quesada formed the new Shaman, who had now returned to their original spelling before beginning work on their third studio album. ~ David Jeffries, Rovi