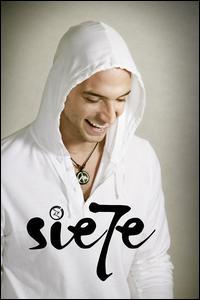 Not to be confused with El Sie7e, an alternative rock band from Columbia, Sie7e is a Latin pop singer/songwriter from Puerto Rico with an eclectic style that draws from rock en español and tropical as well as pop and reggae styles. Born David Rodríguez Labault, he made his full-length album debut in 2006 with the eponymous effort Sie7e on the independent label Musica Estival. Released in conjunction with Machete Music, his second album, Para Mi (2008), was a breakout success that spawned the singles "Aló," "Cógelo," and "Don't Worry Be Happy," the latter a Spanglish cover version of Bobby McFerrin's 1988 international smash hit. A few years later, Sie7e released his third album, Mucha Cosa Buena (2011), on the independent label La Vida Buena Music. A Top Ten hit on the Billboard Latin Pop Albums chart, it includes the singles "Tengo Tu Love" and "Mucha Cosa Buena." ~ Jason Birchmeier, Rovi