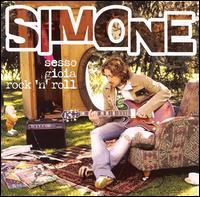 Born in the small town of Vertemate con Minoprio in Como, Italy, Simone Tomassini began taking guitar, piano, and voice lessons when he was just eight years old. He soon completely dedicated himself to music, performing as often as he could and even building a small studio in his house where he could record his work. His big break happened, however, in Milan, when he crossed the street without checking traffic and was almost hit by a passing car. The angry driver turned out to be Enrico Rovelli, former manager of Tomassini's idol Vasco Rossi. The young musician recognized him immediately and convinced him to agree to a meeting later, where Rovelli listened to his demos and was impressed by what he heard. Soon Tomassini, who decided to go solely by his first name, was signed to Rossi's Bollicine Records and in 2004, after an appearance and introduction to the public at that year's San Remo Festival, Simone's debut, Giorni, was released, followed the next year by an opening spot on Rossi's tour and the album Buon Viaggio. In 2006 Simone issued Sesso Gioia Rock N' Roll, and, never one to slow down, 2007 saw the release of a new single -- inspired by a trip to Cuba -- "Niente da Perdere." ~ Marisa Brown, Rovi