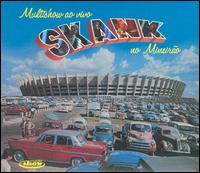 Skank was formed in Belo Horizonte MG in 1991; they became one of the most popular bands in Brazil in the '90s. Mixing influences of pop music, reggae, ska, and rock & roll, the band reached the market with their first album, the independent Skank, which had the hit "Tanto" (a reggae version for Bob Dylan's "I Want You"). Their second release, Calango, had several hits, like "É Proibido Fumar" (Roberto Carlos/Erasmo Carlos), in the heart of the Jovem Guarda revival. Their fifth album, Maquinarama, marked a change of pace, the band began to insert funk, soul music, surf music, drum'n'bass, bossa nova, and Latin pop influences into their sound. Other hits by the group are "Garota Nacional," "Pacato Cidadão," "É Uma Partida de Futebol," "Jackie Tequila," and "Tão Seu." ~ Alvaro Neder, Rovi