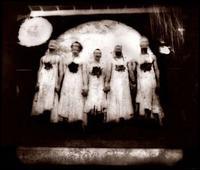 Performance art, art rock, experimental rock, heavy metal -- all are styles of music that have been used to explain one of the more hard to explain bands in all of rock, Sleepytime Gorilla Museum. Some critics have compared the band -- which hails from Oakland, California -- to one of the quirkiest bands of all time, Mr. Bungle, and they may have a point (after all, like Bungle, SGM are not opposed to any musical style, and one of their albums was originally released by a label run by an ex-Bungle member, Trey Spruance). Strange costumes, makeup, and instruments that are both traditional and homemade turn out to be some of the key ingredients to Sleepytime Gorilla Museum, who have built a sizable cult following along the way. Comprised of members -- deep breath now -- Matthias Bossi (drums, glockenspiel, xylophone, vocals), Nils Frykdahl (guitar, flute, vocals), Carla Kihlstedt (violin, percussion guitar, autoharp, organ, vocals), Michael Mellender (percussion, assorted melodic instruments, vocals), and Dan Rathbun (bass, piano log, trombone, lute, vocals), SGM originally formed in 1999. Along the way, the group has released several long-players, including 2001's Grand Opening and Closing, 2003's Live, and 2004's Of Natural History. In 2006, the group signed with the End label, which promptly reissued Grand Opening and Closing with additional bonus tracks, and a year later, the group's fourth studio effort overall, 2007's In Glorious Times. Additionally, most of the Sleepytime Gorilla Museum members have also be spotted in other bands past and present -- some of the more interestingly titled ones being Faun Fables, Idiot Flesh, Mute Socialite, Tin Hat, and 2 Foot Yard, among others. ~ Greg Prato, Rovi