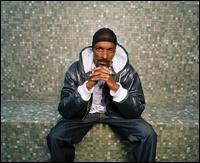 As the embodiment of '90s gangsta rap, Snoop Dogg blurred the lines between reality and fiction. Introduced to the world through Dr. Dre's The Chronic, Snoop quickly became the most famous star in rap, partially because of his drawled, laconic rhyming and partially because the violence that his lyrics implied seemed real, especially after he was arrested on charges of being a murder accomplice. The arrest certainly strengthened his myth, and it helped his debut album, 1993's Doggystyle, become the first debut album to enter the charts at number one, but in the long run, it hurt his career. Snoop had to fight charges throughout 1994 and 1995, and while he was eventually cleared, it hurt his momentum. The Doggfather, his second album, wasn't released until November 1996, and by that time, pop and hip-hop had burned itself out on gangsta rap. The Doggfather sold half as well as its predecessor, which meant that Snoop remained a star, but he no longer had the influence he had just two years before.

Nicknamed Snoop by his mother because of his appearance, Calvin Broadus (born October 20, 1972) was raised in Long Beach, CA, where he frequently ran into trouble with the law. Not long after his high-school graduation, he was arrested for possession of cocaine, beginning a period of three years when he was often imprisoned. He found escape from a life of crime through music. Snoop began recording homemade tapes with his friend Warren G, who happened to be the stepbrother of N.W.A.'s Dr. Dre. Warren G gave a tape to Dre, who was considerably impressed with Snoop's style and began collaborating with the rapper.

When Dre decided to make his tentative first stab at a solo career in 1992 with the theme song for the film Deep Cover, he had Snoop rap with him. "Deep Cover" started a buzz about Snoop that escalated into full-fledged mania when Dre released his own debut album, The Chronic, on Death Row Records late in 1992. Snoop rapped on The Chronic as much as Dre, and his drawled vocals were as important to the record's success as its P-Funk bass grooves. Dre's singles "Nuthin' But a 'G' Thang" and "Dre Day," which prominently featured Snoop, became Top Ten pop crossover hits in the spring of 1993, setting the stage for Snoop's much-anticipated debut album, Doggystyle. While he was recording the album with Dre in August, Snoop was arrested in connection with the drive-by shooting death of Phillip Woldermarian. According to the charges, the rapper's bodyguard, McKinley Lee, shot Woldermarian as Snoop drove the vehicle; the rapper claimed it was self-defense, alleging that the victim was stalking Snoop. Following a performance at the MTV Music Awards in September 1993, he turned himself over to authorities.

Snoop spent much of 1995 preparing for the case, which finally went to trial in late 1995. In February of 1996, he was cleared of all charges and began working on his second album, this time without Dre as producer. Nevertheless, when The Doggfather was finally released in November 1996, it bore all the evidence of a Dre-produced G-funk record. The album was greeted with mixed reviews, and it initially sold well, but it failed to produce a hit along the lines of "What's My Name?" and "Gin & Juice." Part of the reason for the moderate success of The Doggfather was the decline of gangsta rap. 2Pac, who had become a friend of Snoop during 1996, died weeks before the release of The Doggfather, and Dre had left Death Row to his partner Suge Knight, who was indicted on racketeering charges by the end of 1996. Consequently, Snoop's second album got lost in the shuffle, stalling at sales of two million, which was disappointing for a superstar.

Perhaps sensing something was wrong, Snoop began to revamp his public image, moving away from his gangsta roots toward a calmer lyrical aesthetic. He also began making gestures toward the rock community, signing up to tour with Lollapalooza 1997 and talking about two separate collaborations with Beck and Marilyn Manson. The solo Da Game Is to Be Sold Not to Be Told, Snoop's first effort for No Limit, followed in 1998; No Limit Top Dogg appeared a year later and Dead Man Walkin' the year after that. Tha Last Meal followed in December of that same year. The heavy release schedule resulted in varying musical quality from album to album, but by the turn of the century, Snoop had become such a cultural phenomenon that his albums almost became secondary to the personality behind them. An autobiography appeared in 2001, followed by a stream of movie roles in several high-profile pictures. Late in 2002, Snoop released his first album for Capitol, Paid tha Cost to Be da Bo$$. He then switched to Geffen for 2004's R&G (Rhythm & Gangsta): The Masterpiece. The hit album was followed a year later by Welcome to tha Chuuch: Da Album, a collection of tracks from the Welcome to the Chuuch mixtape series. That same year he hosted a West Coast peace summit in hopes of squashing all beefs.

In 2006, he appeared on Tha Dogg Pound's Cali Iz Active and Ice Cube's Laugh Now, Cry Later. Toward the end of the year the intentionally leaked "My Peoples" freestyle appeared. The track paid tribute to many involved in Cali's Latin rap community, so it was no big surprise when "Vato" with Cypress Hill's B Real became his next album's leadoff single. The hard and very G-funk Tha Blue Carpet Treatment triumphantly capped off a year of heavy West Coast activity. In late 2007, he recruited two hip-hop veterans -- new jack swing legend Teddy Riley and West Coast hero DJ Quik -- and formed the production team QDT Muzic. The team oversaw Snoop's 2008 album, Ego Trippin', which included the single "Sensual Seduction." In 2009, he issued Malice N Wonderland, the maiden release of a new alliance with the reactivated Priority label, which also signed him on as its creative chairman. He promoted the album a couple months prior to its street date when he hosted the live wrestling television broadcast WWE Raw. A year later the CD/DVD set More Malice rounded up some odds and ends from the album and packaged them with a DVD featuring the Malice N Wonderland short film. In 2011, he released Doggumentary, an album he considered the sequel to his classic debut. The album featured production from the likes of Swizz Beats, DJ Khalil, and Scott Storch, while guest artists included Kanye West, John Legend, Wiz Khalifa, and Willie Nelson. Also arriving that same year was a feature film with Khalifa, Mac and Devin Go to High School, along with its accompanying soundtrack. ~ Stephen Thomas Erlewine, Rovi