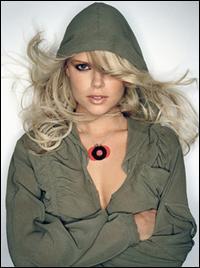 Australian actress and singer Sophie Monk began her professional career in 1999 when she earned a spot on the television show Popstars. The show's premise was to create a female pop group, and after a series of on-air talent competitions, Monk was selected along with Belinda Chapple, Katie Underwood, Sally Polihronas, and Chantelle Barrios (who was replaced soon after by Tiffani Wood) to form Bardot. After the group split in 2002, Monk pursued a solo career, signing with Warner Music and working with producer Rob Davis on her first solo single, "Inside Outside," which was released that same year. Her debut album, Calendar Girl, was released in 2003. Despite an extensive advertising campaign prior to the album's release, Calendar Girl's sales were relatively disappointing. Although Monk returned to the studio and began recording new material at the start of 2004, she soon parted ways with Warner Music to concentrate on an acting career. She has since appeared in a number of television and film projects, including The Mystery of Natalie Wood, Date Movie, and Click, as well as a role in the music video for the blink-182 song "Always" and a part in Sex and Death 101, a straight-to-DVD film released in March 2008. In January 2008, media reports circulated stating that Monk had broken up with her longtime boyfriend Benji Madden, lead guitarist of Good Charlotte. The split was confirmed a month later. ~ Katherine Fulton, Rovi