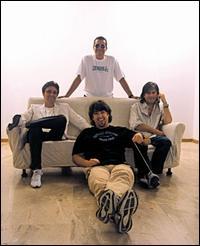 Stadio remained one of the premier bands in Italian pop for more than a quarter century. Singer Gaetano Curreri, guitarist Ricky Portera, bassist Marco Nanni, keyboardist Fabio Liberatori, and drummer Giovanni Pezzoli co-founded the group in 1979 after first collaborating on a session headlined by vocalist Lucio Dalla. Their self-titled debut LP followed in 1982, and two years later Stadio earned its first real mainstream attention via "Allo Stadio," a popular and critical favorite at the annual San Remo Festival. In late 1984 Stadio scored its signature hit, "Chiedi Chi Erano i Beatles," but in the wake of the subsequent LP Canzoni Alla Radio, Portera resigned from the group. Keyboardist Beppe d'Onghia was named his replacement, but his tenure proved brief, and as Nanni and Liberatori exited as well, only Curreri and Pezzoli remained from the original lineup. With the additions of guitarist Andrea Fornili and bassist Roberto Drovandi, the reconfigured Stadio resurfaced in 1989 with Puoi Fidarti di Me. A move to EMI preceded the smash Siamo Tutti Elefanti Inventati. With 1995's Di Volpi, di Vizi e di Virtù, Stadio scored its biggest hit in a decade via the single "Ballando al Buio." The follow-up, Il Canto Delle Pellicole, celebrated the centennial of the cinema by assembling the band's many contributions to film and television soundtracks. Stadio made a triumphant return to the San Remo Festival in 1999 with "Lo Zaino," resurfacing in 2002 with the smash full-length Occhi Negli Occhi, which launched the hit "Sorprendimi." L'Amore Volubile followed three years later. The 2007 release of Parole Nel Vento heralded another return to San Remo, this time with the song "Guardami." ~ Jason Ankeny, Rovi