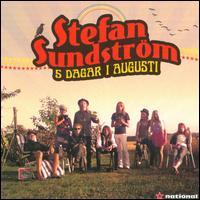 Maybe Stefan Sundström was too unsophisticated and coarse to ever reach a big audience and, sure, he couldn't sing. But he was still the most influential Swedish singer/songwriter in the '90s, together with Lars Demian. Sundström's style had its roots in an old Swedish ballad tradition, going back to Evert Taube and even 18th century poet Carl Michael Bellman, but also contained straightforward rock & roll. It was copied by numerous aspiring bands and became sort of an informal standard against which younger singer/songwriters, like Lars Winnerbäck, had to be tested.

Sundström grew up in Stockholm, Sweden, and learned to play the guitar at the age of 15. Five years later, in 1980, he released two singles with the group Trots. But envisioning a market of cheap cassettes in order to make the music available for everyone, he spent the coming eight years releasing tapes on non-profit labels like Sista Bussen. 1989's Renjägarens Visor, which is considered his first real album, was actually also released on cassette and, in a few years, it became almost impossible to get a hold of. Backing Sundström on the tape was the band Apache. En Bärs Med Nefretite was Sundström's only LP before the CD took over, and after being signed to MNW, he released Happy Hour Viser, Hå Hå Ja Ja, and Vitabergspredikan, all of them with Apache. For the next album, Sundström chose to use another band, consisting mainly of violins, cellos, and a choir. This resulted in music markedly different from that he had made earlier, and the title track, "Nästan Som Reklam," became Sundström's biggest hit. After a reunion with Apache, Babyland was released in 1997. But during the break, the members of the band had formed Weeping Willows together with singer Magnus Carlsson, and while playing with Sundström on some more shows, they would soon concentrate on their own, commercially more successful career. Babyland was clearly influenced by the Rolling Stones and got a very mixed reception, and even more so did the next album, Fisk I En Skål, released in 2000. Some critics named Sundström pathetic and incompetent, while others saw him as an honest outpost in superficial times. ~ Lars Lovén, Rovi