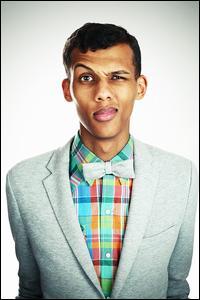 Stromae is a Belgian vocalist, songwriter, and producer whose music combines hip-hop flavors with the cool, polished rhythms of house and other varieties of electronic dance music; he's also known for his clean-cut look and trademark bow tie. Stromae was born Paul van Haver in Brussels on March 12, 1985. Van Haver's father, from Rwanda, left the family when he was young and he rarely saw him; his was raised by his Belgian mother and developed an interest in music at an early age. When he was 11, Van Haver became a student at L'Académie Musicale de Jette, and started playing the drums. In 2005, he took up rap music, and after briefly performing as Opmaestro, he took the stage name Stromae (an anagram for "Maestro") and launched a short-lived hip-hop combo named Suspicion. By 2007, Stromae was back to working as a solo act, and he recorded his first single, "Juste un Cerveau, un Flow, un Fond et un Mic ..." It was in 2009 that he got his real big break -- while working at a Belgian radio station, he created the song "Alors on Dance" using his home recording setup, and the manager of the station was impressed enough with the track to play it on air. Response from listeners was enthusiastic, and Stromae struck a deal with Polygram Records: "Alors on Dance" became a number one hit in Belgium, and went on to repeat that success in a dozen countries, including Germany, France, Italy, Switzerland, Greece, and Denmark. As "Alors on Dance" climbed the charts across Europe and Stromae's videos became a sensation on YouTube, he released his first album, Cheese, in 2010. In August 2010, Stromae's career got a major boost in the United States when Kanye West collaborated with him on a remix of "Alors on Dance," featuring a guest rap from West. ~ Mark Deming, Rovi