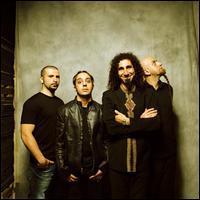 System of a Down

Like many late-'90s metal bands, System of a Down struck a balance between '80s underground thrash metal and metallic early-'90s alternative rockers like Jane's Addiction. Their dark, neo-gothic alternative metal earned a cult following in the wake of the popularity of such likeminded bands as Korn and the Deftones. Vocalist Serj Tankian, guitarist Daron Malakian, bassist Shavo Odadjian, and drummer John Dolmayan formed System of a Down in Southern California in the mid-'90s. They quickly earned a strong following in Los Angeles, largely based on strong word of mouth. A three-song demo began circulating through metal collectors, and their fan base soon spread throughout not only America, but Europe and New Zealand.

By the end of 1997, the group had signed to American, then distributed by Columbia Records. American/Columbia released the group's eponymous debut album in the summer of 1998, securing the band opening spots on the Slayer and Ozzfest tours. System eventually went gold, and set up the September 2001 release of the even more ambitious Toxicity. System's second effort was another heavy music triumph, shaming the majority of their nu-metal competition and running away with multi-platinum honors. The quartet didn't slow down. Malakian started the eatURmusic imprint and Tankian a label called Serjical Strike; Tankian also collaborated with Armenian avant-garde folk musician Arto Tuncboyaciyan in a project called Serart. In November 2002 System issued the bare-bones but no less powerful odds 'n' ends set Steal This Album!; they also remained politically active.

By 2004, System of a Down was back in the studio with Rick Rubin. The bold result of those sessions was a single, epic album released in two parts. Mezmerize/Hypnotize kept System's furious creativity alive, incorporating the wild vocal melodies, lyrical passion, and rabid structural shifts that had become their trademark. Mezmerize, or part one, appeared in May 2005, while Hypnotize, its final section, appeared later in the year, and both hit the top of the album charts. ~ Stephen Thomas Erlewine, Rovi