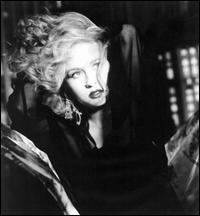 No white artist sang R&B more convincingly than Teena Marie, whose big, robust vocals were so black-sounding that when she was starting out, some listeners wondered if she was a light-skinned African-American. Marie grew up in west Los Angeles in a neighborhood that was nicknamed "Venice Harlem" because of its heavy black population. The singer/songwriter/producer was in her early twenties when, around 1977, she landed a job at Motown Records. It was at Motown that she met her mentor and paramour-to-be, Rick James, who ended up doing all of the writing and producing for her debut album of 1979, Wild and Peaceful. That LP, which boasted her hit duet with James, "I'm Just a Sucker for Your Love," didn't show Marie's picture -- so many programmers at black radio just assumed she was black. When her second album, Lady T, came out, much of the R&B world was shocked to see how fair-skinned she was. But to many of the black R&B fans who were eating her music up, it really didn't matter -- the bottom line was she was a first-rate soul singer whose love of black culture ran deep.

By her third album, 1980's gold Irons in the Fire, Marie was doing most of her own writing and producing. That album boasted the major hit "I Need Your Lovin'," and Marie went gold again with her next album, It Must Be Magic (which included the major hit "Square Biz"). It Must Be Magic turned out to be her last album for Motown, which she had a nasty legal battle with. Marie got out of her contract with Motown, and the case ended up with the courts passing what is known as "The Teena Marie Law" -- which states that a label cannot keep an artist under contract without putting out an album by him or her.

Switching to Epic in 1983, Marie recorded her fifth album, Robbery, and had a hit with "Fix It." In 1984, Marie recorded her sixth album, Starchild, and had her biggest pop hit ever with "Lovergirl." Though Marie had often soared to the top of the R&B charts, "Lovergirl" marked the first time she'd done so well in the pop market. Ironically, Marie was a white singer who had enjoyed little exposure outside the R&B market prior to "Lovergirl."

Three more Epic albums followed: 1986's Emerald City, 1988's Naked to the World (which contained her smash hit "Ooh La La La"), and 1990's Ivory. Unfortunately, Marie's popularity had faded considerably by the late '80s, and Epic dropped her. In 1994, the singer released Passion Play on her own Sarai Records label. Ten years later, she signed to Cash Money and released La Doña, featuring assistance from Gerald LeVert, Rick James, and MC Lyte. Sapphire followed two years later. Though both La Doña and Sapphire peaked at number three on the R&B/Hip-Hop Albums chart, she switched to Stax for her next album, 2009's Congo Square. On December 26 the following year, Marie died in her sleep at her home in Pasadena, California; she was 54 years of age. Marie's daughter Alia Rose subsequently oversaw the mixing, mastering, and release of Beautiful, an album recorded prior to Marie's passing. It was released through UMe in 2012. ~ Alex Henderson, Rovi