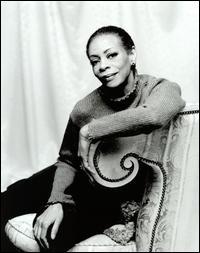 Jazz singer Teri Thornton was a favorite of critics in the '60s and after a three decade-long year hiatus, returned to performing in the '90s amid critical acclaim. She's best known for singing "Somewhere in the Night," the theme of detective TV series The Naked City, starring Paul Burke.

Thorton also won the Thelonious Monk International Jazz Competition in the Vocal category with her rendition of "I'll Be Easy To Find" in 1998. That same year, she was diagnosed with cancer. Winning the competition bolstered her career leading to a new recording, I'll Be Easy To Find after more than three decades. At the age of 65, Thornton died of complications from bladder cancer at Englewood Hospital in Englewood, NJ on May 2, 2000. ~ Ed Hogan, Rovi