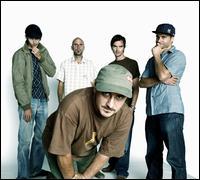 Austrian hip-hop group Texta were formed in Linz in Upper Austria in 1993. The group consists of five members: MCs Flip (Philipp Kroll), Huckey (Harald Renner), Laima (Klaus Laimer, also credited as Dalai Laima), Skero (Martin Skerwald), and DJ Dan (Daniel Reisinger, sometimes credited as DJ Dan da Man). All the rappers contribute to the (German-language) lyrics, with Flip usually providing the beats. Naturally, the group's music is influenced by American hip-hop acts, but Texta have garnered a considerable fan base given their Upper Austrian dialect raps, their D.I.Y. attitude, and their cultural sensibilities that don't attempt to cloak the fact that they are Austrian, but rather emphasize it.

They released their first vinyl EP, Geschmeidig, in 1995, followed by a 12" single in 1996: "Sei Lieb zu Mir/Da Raw Shit," both released on Ducksquad Records. The group played numerous live shows afterwards (among them shows with Fettes Brot, Massive Töne, and even House of Pain) and landed tracks on several compilations. Texta's debut album, Gediegen, was released in December 1997, followed by an extensive tour through Germany together with Blumentopf and Total Chaos. An instrumental version of the album, Geschwiegen, was released in 1998, and was even sold in Japan and the United States.

Another 12" single, "Fragestude," arrived in 1999, as did their second album Gegenüber, which has sold over 15,000 copies. Again, the group released an instrumental version of the album, under the title Vis-à-Vis. A new EP called Sprachbarrieren was issued in 2000, and the group was nominated for an Amadeus Award in 2001. Another EP, Kaleidoskop, followed, and by the release of their third album, Blickwinkel, in January 2002, the group's popularity had reached new heights: the album entered the Austrian Top 40, and Austrian radio station FM4 played the single "Wer?" on heavy rotation. The follow-up album So Oder So was released in 2004, also entering the Top 40 and staying there for five consecutive weeks.

Texta also started a record label of their own, Tonträger Records (literally: Records Records), through which they have released albums by local hip-hop newcomers, among them Rückgrat, Brotlose Kunst, and Kayo & Phekt. In 2006, Texta started a side project called Die Unsichtbaren (The Invisibles), a collaboration with several of their protégés, and an album called Schwarze Erde was released. Paroli, Texta's fifth album, followed in 2007. ~ Christian Genzel, Rovi