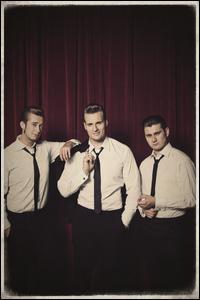 The Baseballs are a German rock & roll band that perform contemporary hits in a throwback style reminiscent of 1950s rock. Fashioned with pompadours and sideburns in accordance with its throwback style, the Baseballs are a trio of vocalists named simply Sam, Digger, and Basti; they're backed up by Lars Vegas (guitar), Klaas Wendling (upright bass), Jan Miserre (piano), and Tomas Svensson (drums). Founded in 2007 in Berlin, Germany, the Baseballs made their debut in 2009 with the hit single "Umbrella," a rock & roll version of Rihanna's then-recent smash single. The full-length album Strike! (2009) followed shortly thereafter and was likewise a hit throughout the German-speaking world, reaching the Top Five in Switzerland, the Top Ten in Germany, and the Top 20 in Austria. The album features cover versions of contemporary hits such as Usher's "Love in This Club," Plain White T's' "Hey There Delilah," and Katy Perry's "Hot N Cold." The Baseballs returned in 2011 with their sophomore release Strings 'n' Stripes. Once again, the album featured reworkings of contemporary pop hits including Katy Perry's "California Gurls," Will Smith's "Miami," and 50 Cent's "Candy Shop." ~ Jason Birchmeier, Rovi