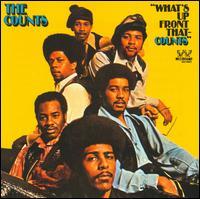 In the early '70s, the boundaries of black pop became more fluid. Soul and funk could intermingle with jazz, hard rock, psychedelia, and singer/songwriting. The Counts were not one of the more exceptional outfits that brewed these influences together; for one thing, they never stuck to any one mixture long enough for listeners to get a handle on the group. They were, however, emblematic of the currents sweeping through R&B at the time, even if they were hardly as innovative as, say, Funkadelic, or Marvin Gaye in his What's Going On period. Offering both vocal and instrumental tracks, the group could lay down loping, jazzy instrumental grooves heavy on the sax and organ. In a heartbeat, they could switch gears into spacy novelties like "Flies Over Watermelon!" and "The Munchies." In between there were some sweet soul ballads, and even a sop to the mainstream with a cover of Carole King's "Jazzman."

Originally a Detroit-based sextet, the Counts' first LP was an instrumental outing on Cotillion, with noted Michigan producer Ollie McLaughlin taking the co-writing credits on all of the songs. A few years later, the group moved to Atlanta, paring down to a quartet by the time they recorded the Love Sign album for the Aware label in 1973. An expanded lineup recorded the Funk Pump album for the same company in 1975; the two Aware albums formed the basis for CD reissues of the Counts' work in the mid-'90s, when their brand of soul-funk-jazz was becoming hip again. ~ Richie Unterberger, Rovi