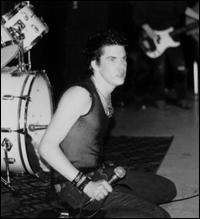 Living fast and dying young is one of rock's great clichés, but no phrase better describes the reasons for the demise of L.A. punkers the Germs. Capable of creating a firestorm of noisy, confrontational music, they were ultimately undone by their perversely charismatic lead singer. He was a madman named Paul Beahm, better known to the world at-large first as Bobby Pyn, later and more famously as Darby Crash, who died Sid Vicious-style out on the mainline at age 22.

Taking musical cues from the Sex Pistols (and English punk in general), as well as the CBGB's scene, and adding the theatricality of Bowie, Iggy, and Lou Reed, Crash was the perfect frontman for the Germs. Backed by guitarist Pat Smear (later of Nirvana and the Foo Fighters), bassist Lorna Doom, and drummer Don Bolles, the Germs kicked up a hellacious racket that strayed from fast/loud punk into art damage and garage grunge. On-stage, their gigs bordered on performance art, with Crash in full Iggy frenzy, diving into the crowd, adorning himself with whatever foodstuffs the audience provided, wearing less-and-less clothing, all done while the band cranked out noisy spasms of simple, but effective, rock noise.

Never capturing this mania on record (how could they?), the Germs' recording career is based on the sole record made during Crash's short life. Produced by Germs fan Joan Jett, (GI) was a fine hunk of early L.A. punk rock that was more literate and compelling that what was being offered by lesser local luminaries such as the Zeroes and the Weirdos. Smear's guitar playing is especially volatile, matching the mewling vocals of Crash note for note. It may not be life-changing music, but the white-hot, adrenal rush is a little bit of heaven.

By the time Crash filled his veins with heroin in 1980, the Germs were pretty much over. Crash's behavior had become increasingly unpredictable, he was spending time in England, and began preforming as a solo act upon returning to L.A. Consequently, the valuable recorded work in this final period is spotty, but much of it shows up on the definitive Germs release Germs (MIA) The Complete Anthology. ~ John Dougan, Rovi