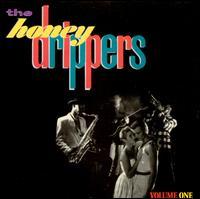 The Honeydrippers were a post-Led Zeppelin side project for singer Robert Plant, allowing him to indulge his sincere love for vintage R&B. Though best known for the all-star aggregate that waxed the group's only recording in 1984, Plant actually formed the Honeydrippers in 1981 as a way to return to his pre-Zeppelin roots in American blues and R&B the group took its name from blues pianist Roosevelt Sykes' nickname. The original lineup featured guitarists Robbie Blunt and Andy Sylvester, saxophonist Keith Evans, saxophonist/harmonica player Ricky Cool, bassist Jim Hickman, and drummer Kevin O'Neil. However, when Plant began collaborating with Blunt on original material, he deemed it more suited to his goals as a solo artist, and he accordingly formed a hard rock backing unit, putting the Honeydrippers on the back burner. After his second solo album, Plant revived the Honeydrippers, this time with an impressive roster of studio guests including guitarists Jimmy Page, Jeff Beck, and Nile Rodgers, keyboardist Paul Shaffer, bassist Wayne Pedziwiatr, and drummer Dave Weckl. Together they recorded the five-song EP The Honeydrippers, Vol. 1, which was released in 1984 and featured Plant's takes on '50s and '60s R&B numbers. The first single, a cover of Phil Phillips' "Sea of Love," was a smash, peaking at number three on the American charts -- one spot better, in fact, than Led Zeppelin's highest-charting single "Whole Lotta Love." The follow-up "Rockin' at Midnight," a Roy Brown jump blues tune, was also fairly successful. Stray Cats guitarist Brian Setzer joined the Honeydrippers' concert lineup, and performed with the group on Saturday Night Live. After touring with the Honeydrippers in 1985, Plant resumed his solo career; there has never been a Honeydrippers, Vol. 2. ~ Steve Huey, Rovi