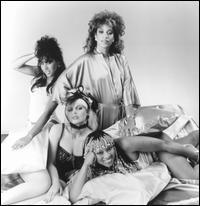 Just as Vanity 6 and Apollonia 6 wouldn't have existed without Prince, the Mary Jane Girls were created by Rick James and were very much a product of the funkster's imagination. The group's name was coined in the late '70s, when James hired them as background singers for his Stone City Band. The Mary Jane Girls (whose name underscored James' fondness for marijuana) soon became an actual group, and in the early '80s were signed to Motown (the R&B powerhouse for which James and his protégée Teena Marie had been recording). With a lineup consisting of Joanne "Jojo" McDuffie (the main singer), Candice "Candi" Ghant, Kim "Maxi" Wuletich, and Ann "Cheri" Bailey, the Mary Jane Girls portrayed various characters James had developed -- while JoJo was the tough street chick and Candi was the glamorous supermodel, Cheri was the cutesy Valley Girl and Maxi was the whip-toting, handcuff-carrying dominatrix in black leather. In 1985, Ann "Cheri" Bailey was replaced by Yvette "Corvette" Marine.

James did all of the writing and producing on the Mary Jane Girls' self-titled debut album of 1983 (which boasted such hits as the infectious "Candy Man" and the sexy, irresistible "All Night Long") as well as on the group's sophomore effort of 1985, Only Four You. That album contained the number three R&B hit "In My House" and the number ten R&B hit "Wild and Crazy Love." The only song James didn't write for the group was a 1986 cover of Frankie Valli & the Four Seasons' "Walk Like a Man," which was included in the comedy film A Fine Mess.

Regrettably, the Mary Jane Girls never recorded a third album. James had a major falling out with Motown in the mid-'80s, and this would lead to the group's breakup. When Ghant was working at the music-industry trade magazine Black Radio Exclusive in 1986, she told On the Scene magazine that she hoped to see the Mary Jane Girls continue and work with hit producers/songwriters Jimmy Jam and Terry Lewis. But that never came about. By 1987, the group had officially broken up. ~ Alex Henderson, Rovi