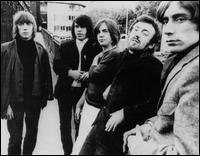 Of all the original British Invasion groups, perhaps none were as underappreciated in the United States as the Pretty Things. Featuring the hoarse vocals of Mick Jagger-lookalike Phil May and the stinging leads of guitarist Dick Taylor (who actually played in early versions of the Rolling Stones with Jagger and Keith Richards), the Pretties recorded a clutch of raunchy R&B rockers in the mid-'60s that offered a punkier, rawer version of the early Stones sound.

Their first two albums, 1965's The Pretty Things and the same year's Get the Picture, as well as a brace of fine major and minor British hits (of which "Don't Bring Me Down" and "Honey I Need" were the biggest), featured first-rate original material and covers, and remain the group's most exciting and influential recordings. Unfortunately, the band remained virtually unknown to American audiences, most of whom would first hear "Don't Bring Me Down" on David Bowie's Pin Ups album (which also included a version of the Pretties' "Rosalyn").

After their initial run of success, the group took a sharp left turn into psychedelia with the orchestrated album Emotions (1967), impressive singles that owed more to Pink Floyd than Bo Diddley, and, most significantly, S.F. Sorrow (1968). The first rock opera, S.F. Sorrow was a major influence on Pete Townshend, who released his much more successful opera, Tommy, with the Who the following year.

Founding member Taylor left shortly after S.F. Sorrow, and the group continued to record progressive rock and hard rock with less impressive results through the mid-'70s, although Parachute (1970) was named Album of the Year by Rolling Stone. The group reunited sporadically for occasional gigs and recordings in their early R&B vein before officially re-forming to release Rage...Before Beauty in 1999 and Balboa Island eight years later. ~ Richie Unterberger, Rovi