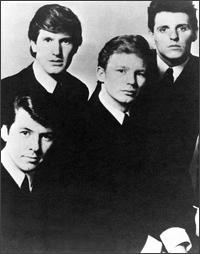 Founded in 1957 by John McNally (guitar/vocals), the Searchers were originally one of thousands of skiffle groups formed in the wake of Lonnie Donegan's success with "Rock Island Line." The Searchers' immediate competitors included bands such as the Wreckers and the Confederates, both led by Michael Pender (guitar, vocals), and the Martinis, led by Tony Jackson (guitar/vocals). By 1959, McNally and Pender were working together as a duet; later in the year, Jackson joined as the lead vocalist. After drummer Norman McGarry left the Searchers he was replaced by Chris Crummy, who quickly renamed himself Chris Curtis. Other changes were in the works as Jackson built and learned to play a customized bass guitar. Learning his new job on the four-stringed instrument proved too difficult to permit him to continue singing lead, and McNally and Pender brought in a fifth member, Johnny Sandon (born Billy Beck). Johnny Sandon & the Searchers lasted from 1960 through February of 1962, and were extremely popular on the dance hall and club circuit in Liverpool. Sandon cut out for a career on his own, with another band called the Remo Four in early 1962.

Meanwhile, the Searchers, now a quartet with Jackson once again lead singer, became one of the top acts on the Liverpool band scene, playing textured renditions of American R&B, rock & roll, country, soul, and rockabilly. The group was signed to Pye Records in mid-1963 and their first single, a cover of the Drifters' "Sweets for My Sweet," was released in August of 1963, hitting number one on the British charts. While the Beatles quickly outdistanced all comers, the Searchers did, indeed, go to the top of the charts with two of their next three singles, "Needles and Pins" and "Don't Throw Your Love Away." Another record, "Sugar and Spice," written by their producer Tony Hatch under the pseudonym Fred Nightingale, stalled at the number two spot. Over the next nine months, the band staked out a sound that was one of the most distinctive in a rock scene crawling with hundreds of bands. Their music was built around the sound of a crisply played 12-string guitar, coupled with strong lead vocals and carefully, sometimes exquisitely arranged harmonies, so that they could credibly cover American R&B standards like "Love Potion No. 9" or Phil Spector-based girl group pop like "Be My Baby." Their 1964 singles included a venture into folk-rock before the genre had been "invented" in the press, in the form of a cover of Malvina Reynolds' "What Have They Done to the Rain." Interestingly, their 12-string guitar sound would become a key ingredient in the success of the Byrds, who even took the riff from "Needles and Pins" and transformed it into the main riff of "Feel a Whole Lot Better."

In July of 1964, with the group riding the upper reaches of the British charts, and with their third album in nine months in release, it was announced that Tony Jackson was leaving the Searchers to form his own band, and would be replaced by Frank Allen, who had been playing bass with Cliff Bennett & the Rebel Rousers. The turning point for the band came in 1965, as the British and international fascination with the Liverpool sound faded away. The Searchers began casting their net wider for material to cover, in addition to coming up with one original hit, the Curtis/Pender-authored "He's Got No Love." By the beginning of 1966, the group's string of chart hits seemed to have run out, and Chris Curtis exited in early 1966, claiming to have become exhausted from the group's constant touring. The Searchers, with Johnny Blunt on drums, continued working and had their last hit, "Have You Ever Loved Somebody," which barely cracked the Top 50 in October of 1966. The group continued working, however, playing clubs and cabarets in England and Europe. Blunt exited at the end of the '60s, but was replaced by Billy Adamson, and this lineup of the Searchers continued intact until the mid-'80s, working for 35 weeks a year throughout Europe with an occasional U.S. visit. Although they played as part of Richard Nader's "Rock 'n Roll Revival" shows, they never became an "oldies" act, always adding new material, including originals and covers of work by songwriters such as Neil Young to their sets, and in 1972, the band cut an album for British RCA.

At the end of the '70s, their recording fortunes were revived once again as Seymour Stein, the head of Sire Records, signed the Searchers for two albums. Those records, The Searchers and Love's Melodies, were the best work the group ever did, highlighted by achingly beautiful yet vibrant and forceful playing and singing, and an unerring array of memorable hooks and melodies. Those two albums were followed by a series of tracks recorded for their original label, Pye Records, in the early '80s. The group held their audience well into the '80s, playing before crowds of as large as 15,000 along one U.S. tour. In 1985, after playing together for 26 years, Pender and McNally split up, with McNally continuing to lead the Searchers (with Adamson and Allen, with Spencer James added on second guitar and vocals), while Pender formed Mike Pender's Searchers, consisting of Chris Black (guitar, vocals), Barry Cowell (bass, vocals), and Steve Carlyle (drums, vocals). Both groups have toured extensively, and the Searchers under McNally have recorded on occasion. ~ Bruce Eder, Rovi