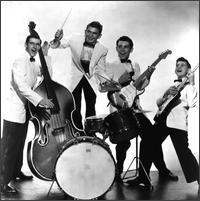 The Sparkletones' story should have been a movie. For a lot of listeners, they were and are what rockabilly music was really all about -- four kids from the south, none older than 16 and one as young as 13 when they started, getting together and making fast, sometimes raunchy sounds, literally the soundtrack to their own teen years, and having a lot of fun and getting an adventure out of it. Their music at its best sounded as freewheeling as their approach to it really was, and they were rewarded in October of 1957 with a number 17 placement on the Billboard charts for the only record they ever did chart, "Black Slacks."

The number 17 spot tells only part of the story, however. "Black Slacks" stayed on the charts for more than four months, selling a lot of copies in that time, well enough to keep the band going for three years while they vainly searched for another hit. It was one of the earliest successes for ABC-Paramount Records, a label that had been formed only two years earlier, just as rock & roll was breaking out and, along with "At the Hop" by Danny & the Juniors, helped the label succeed when no one thought that was possible. Joe Bennett (vocals, lead guitar), Wayne Arthur (upright bass), Howard "Sparky" Childress (guitar), and Jimmy "Sticks" Denton (drums) ranged in ages from 13 to 16 when they first got together, and all had been raised in Spartanburg, S.C. All four attended Cowpens High School in Spartanburg, and came from respectable, middle-class families. Indeed, in contrast to a lot of kids who wanted to play music for a living, all four members of the Sparkletones were regular churchgoers, and Joe Bennett, the singer and lead guitarist, was one of the leaders of the Church Youth Movement in South Carolina.

They'd all been friends and had gotten together in 1956. Elvis was hitting it big nationally then, becoming a bona fide superstar (even if no one was using that word yet), and Carl Perkins had burned up the chart early that year with "Blue Suede Shoes," and thousands of working class kids from the south, in particular, now saw rock & roll as a way to grab some glory and some big money. That was the Sparkletones' situation; they loved the music and playing it, but they were all hoping for some success at doing it. Chances are that the group might've toiled in anonymity for a few months and broken up, but for sheer luck.

A CBS talent agent named Bob Cox came through Spartanburg and was auditioning young performers for the network. The Sparkletones were one of dozens of amateur outfits from all over the state who turned up at Spartanburg Memorial Auditorium in January of 1957.

They took first prize, and were good enough that they took Cox's career at CBS. He resigned his position to become their manager, and two days later the quartet, who'd never been out of their home state before, were on a plane to New York City, and a few days after that they were signed to ABC-Paramount. Ironically, their first recording session followed one by another new ABC artist, Paul Anka, who was cutting "Diana." He even sang background on "Black Slacks," the group's debut single, co-authored by Joe Bennett and Jimmy Denton, cut that day.

"Black Slacks" was a stunner: fast-paced, with rippling lead guitar, and filled with teen catch-phrases of the period, it sounded a little like the Everly Brothers on uppers, with a guitar part that was somewhere midway between Carl Perkins and Buddy Holly. It was the almost perfect song at just the right moment to get the band a foothold, but it needed to be worked, and that where Bob Cox came in.

Cox was not only the group's manager but, in effect, their legal guardian as he booked them on an extended series of concerts and personal appearances that stretched for many months. The single first broke on radio in their hometown, but gradually it spread to other stations. Encouraging radio play meant doing more concerts and hitting more towns and cities, in the hope of getting the attention of disc jockeys -- the quartet tooled around the country in a 10,000-mile trek that took them to California and back in a Desoto, and a second car, with bandmembers (including 14-year-old Sparky) sharing the driving. It was real barnstorming, but with good gigs lined up, including an extended engagement in Las Vegas -- Elvis Presley came to see them once during that period. They also did television shows, including The Nat King Cole Show, American Bandstand, and The Ed Sullivan Show, with the latter the culmination of their performing career. Those appearances allowed the Sparkletones to cross paths with the likes of the Everly Brothers, Buddy Holly, and Bobby Darin, among numerous others.

Unfortunately, for the group, which released records both as Joe Bennett & the Sparkletones, and as the Sparkletones, they could never come up with a successful follow-up to "Black Slacks." Some of the problem had to do with timing. Rockabilly really didn't hold the charts or the public's interest for too long: Carl Perkins' "Blue Suede Shoes" started the boomlet, and it can be argued that "Black Slacks" a year and nine months later ended it. By 1958, the public's taste was changing, and the group's sound was no longer in synch with the mass public or what radio disc jockeys were looking for (Carl Perkins never had a second hit, either).

They soldiered on for three years, issuing "Penny Loafers and Bobby Sox," "Cotton Pickin' Rocker," "We've Had It," "Late Again," and "Run Rabbit Run," good, lively songs, none of which charted. Indeed, some of the group's B-sides were even better, such as "Rocket," which is pure, high-voltage rockabilly but manages to display elements of a Black vocal sound as well. By 1959, their contract with ABC-Paramount was up, and they moved to the Paris label, for four singles that did no better. By 1960, they'd also modified their sound somewhat, adding more of a harmony vocal component on numbers like "Beautiful One," but they still performed and recorded with a lot of energy.

The group's membership remained remarkably stable for the first three years, but the boys had to get on with their lives and educations. Howard "Sparky" Childress left to pursue a separate career, and was replaced by Gene Brown, who was a drummer but joined on guitar. Jimmy Denton left to finish high school, and Brown took over on the drums, while Donnie Seay came in as second guitarist. The band's history came to a close around 1960-1961, and the bandmembers, having seen a considerable amount of the world and adventure as teenagers, returned to more conventional lives.

Joe Bennett joined the Air Force and later worked as an air traffic controller, although as co-author of "Black Slacks," he retained ties to the music business through publishing, and taught music as well. Childress worked in country music in the early '60s and worked in sales, Wayne Arthur sang with a gospel group in his spare time, and Denton ran an auto parts store. Donnie Seay remained in music as a guitarist, and Gene Brown, after a stint in the paratroopers, became a corporate security director. In recent years, several members of the group have reunited informally in the area around Spartanburg. "Black Slacks" was revived by Robert Gordon in the '70s, and was later picked up by Disney for use in the movie The Borrowers Down Under, and it gets played frequently as a rockabilly classic. MCA's release of a ten-song Sparkletones LP in the early '80s sparked some interest in the group, although the company has never been willing to put out a Sparkletones CD.

The bootleggers have taken care of that oversight -- although that fails to benefit the bandmembers -- and the Sparkletones today are immortalized as members of the Rockabilly Hall of Fame. ~ Bruce Eder, Rovi