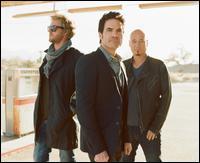 Train was inescapable during the turn of the 21st century, when songs like "Calling All Angels" and "Drops of Jupiter" made the San Francisco residents some of America's most popular balladeers. Although formed during the glory days of post-grunge, the group found more success in the pop/rock world, where Train straddled the line between adult contemporary and family-friendly alternative rock. The hits began drying up after 2003, but Train continued releasing material throughout the rest of the decade and even returned to the charts in 2010, when the single "Hey, Soul Sister" became a surprise Top 10 hit.

Following the dissolution of his Led Zeppelin cover band, singer Pat Monahan left his hometown of Erie, PA, in late 1993. He resettled in California and crossed paths with Rob Hotchkiss, the former frontman of a Los Angeles group named the Apostles. The two formed their own duo and began playing local coffeehouse shows, eventually expanding the group to a trio with the addition of former Apostles guitarist Jim Stafford. Bassist Charlie Colin and drummer Scott Underwood also climbed aboard, thus solidifying Train's lineup in 1994.

Over the course of several years, Train developed a sizable audience in the San Francisco area. The band also toured the country, opening shows for the likes of Barenaked Ladies and Counting Crows while drumming up enough money to record an album. Although few labels showed interest at first, Train eventually attracted the interest of Columbia Records, who signed the band to one of its smaller labels -- Aware Records -- and issued the self-financed debut record Train in 1998. "Meet Virginia" became a Top 40 hit one year later, but the band truly hit its stride in 2001, when Drops of Jupiter became a multi-platinum success thanks to its titular single. The song remained in the Top 40 for nearly 40 weeks, while the album itself sold more than three million copies.

My Private Nation followed in 2003 and went platinum, largely due to the successful single "Calling All Angels." Although the album didn't yield any more Top 40 hits, three of its songs fared well on the adult contemporary charts, a sign that Train had traded its alternative rock roots for an older fan base. For Me, It's You followed in 2006, but sales proved to be the lowest of Train's career. Accordingly, Monahan briefly turned his focus inward, releasing a solo album in 2007 and briefly touring behind it. He returned to the fold shortly thereafter, though, and Train issued its fifth album, Save Me, San Francisco, in 2009. The album helped rejuvenate Train's career, with "Hey, Soul Sister" peaking at number three on the Billboard 100. In 2012 the band released its sixth studio album, California 37. ~ Andrew Leahey, Rovi