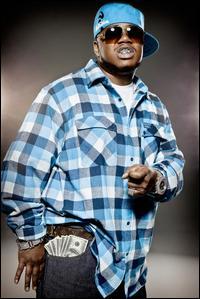 Chicago rapper Twista made his recording debut on "Po Pimp," a platinum single by his fellow Windy City rappers Do or Die. Following "Po Pimp," Twista signed with Big Beat/Atlantic and released his debut, Adrenaline Rush, in the summer of 1997. Mobstability followed a year later, and in 1999 Twista returned with Legit Ballin'. In fall 2002, Twista hooked up with Ludacris, Jay-Z, Bone Thugs-N-Harmony, and other rap moguls for the recording of his third album. Kamikaze came out at the beginning of 2004 and promptly hit the Billboard 200, riding the impetus of his number one hit single "Slow Jamz." In 2005 he returned with the album The Day After and the hit single "Girl Tonite" with Trey Songz. Two years later, Adrenaline Rush 2007 appeared. After forming his own label, Get Money Gang, in 2008 he released the album Category F5 in 2009. ~ Stephen Thomas Erlewine, Rovi