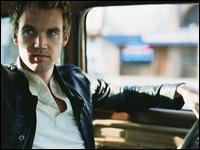 Singer and songwriter Tyler Hilton started in music early, the product of a musical family that kept him curious about playing guitar, singing, and performing. By seventeen he was writing his own songs, and had become an open mic fixture in his hometown of Palm Springs, California. In 2000 Hilton wrote, recorded and released an eponymous debut and began to shop it, but it was a chance opportunity that brought his talent to the record execs' attention. That same year an impromptu performance over the phone for KLOS Los Angeles morning personalities Mark and Brian landed Hilton a spot at the station's Christmas concert. The exposure helped catch Maverick Records' ear, and the label signed him soon after. As his music career was progressing, Hilton also looked into acting. He joined the cast of the WB teen drama One Tree Hill in 2004, playing a troubled singer named Chris Keller. Hilton also landed the role of Elvis Presley alongside Joaquin Phoenix' Johnny Cash in the 2005 biopic Walk the Line. One Tree Hill was a great promotional platform for Hilton's Maverick debut, which hit shelves in September 2004. Tracks of Tyler Hilton was an engaging blend of pop and mild Americana influences, led by Hilton's husky, likeable vocals. (It included the song "Glad", which he had performed as Keller on the series.) In early 2005 Hilton embarked on his first tour in support both of Tracks of and the freshly-released One Tree Hill soundtrack. ~ Larry Belanger, Rovi