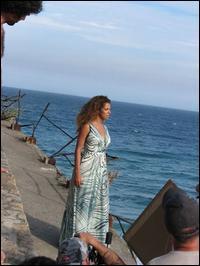 Born in Mato Grosso, Brazil, in 1976, singer and composer Vanessa da Mata grew up listening to venerated artists like Antonio Carlos Jobim, Milton Nascimento, and Luiz Gonzaga, as well as the sounds of Rio she picked up on her radio. At 15, she relocated to Uberlândia, Minas Gerais, and began performing in clubs, soon moving to São Paulo to continue her career. She joined a reggae band, even singing with the famed Jamaican group Black Uhuru for a stint, while playing basketball and working as a model in her free time. But despite the strength of her voice, da Mata found her first taste of success as a composer. Teaming up with Chico César, she wrote the song "A Força Que Nunca Seca," the title track for Maria Bethânia's 1999 album, and soon she was also working on pieces for Daniela Mercury, Ana Carolina, and César himself. Now with some years of experience under her belt, da Mata decided to finally record her own solo material, releasing her self-titled debut in 2002. It was her next album, Essa Boneca Tem Manuel, however, that really pushed her into the limelight, aided by the strength of the single "Ai Ai Ai." Three years later the singer's third album, Sim, was released, and featured appearances from the acclaimed pianist João Donato and American rocker Ben Harper, among others. ~ Marisa Brown, Rovi