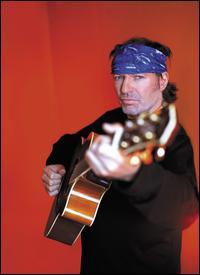 Doubtless Italy's one and only true rock star, Vasco Rossi is not only the most successful Italian singer since the 1980s, but he is also the most realistic and consistent incarnation of the triad of sex, drugs (or alcohol), and rock & roll. Ignored -- when not hated -- by the critics but adored by his fans, Rossi was the first Italian artist to tour the stadiums (at the end of the 1980s), reaching the apex of a popularity that has survived uncountable trend changes and at least two full decades. His songs, heavy riff-based rockers and romantic power ballads, and his lyrics made him a sort of a prophet for a generation of disappointed youngsters who found in them an escape, a door to an easier, reckless life: the "Vita Spericolata" described in one of his most famous hits.

Born in Zocca, near Modena, February 4, 1952, the son of a housewife and a truck driver, Rossi had his first musical experiences when, at 13, he won a festival for young singers. In the 1970s he moved to Bologna, where he got in touch with the local singer/songwriter scene; in the same years he was also one of the founders of Punto Radio, one of the first private radio stations of Italy. There he met Gaetano Curreri, the future singer of Stadio, and Maurizio Solieri. Following their advice, in 1977 Rossi released his first single, "Jenny"/"Silvia," followed by the albums ...Ma Cosa Vuoi Che Sia una Canzone (1978) and Non Siamo Mica Gli Americani (1979, later renamed Albachiara, from its most famous song). Equally influenced by 1960s Italian pop, '70s singers/songwriters, and U.S. rock, those records showed an interesting but not yet mature personality, with a bizarre sense of humor that would gradually disappear in his next releases. Colpa d'Alfredo (1980) and Siamo Solo Noi (1981) gained him a wider audience, as did Vado al Massimo, whose title track finished last at the 1982 edition of the Sanremo Music Festival, where Rossi returned in 1983 with "Vita Spericolata," the song that led him -- and the album Bollicine -- to the top of the charts.

A magic moment of which the live album Va Bene, Va Bene Così was a vivid photograph, suddenly turned into nightmare when Rossi was arrested for cocaine possession. Three weeks of detention, though, were not enough to stop his career, and his return with Cosa Succede in Città (1985) and C'è Chi Dice No (1986) was triumphant. Liberi, Liberi (1988), his first record on EMI, saw him momentarily split with producer Guido Elmi and with his backing band -- in which a pivotal role was played by guitarists Solieri and Massimo Riva -- who in the meantime had started releasing records on their own under the moniker Steve Rogers Band. The resulting tour was documented by the monumental Fronte del Palco (1990) and by Vasco Live 10.7.90 San Siro (1991), recorded in the famous Milan stadium. Rossi was then a real rock star, the only one who could compete with international superstars such as the Rolling Stones, U2, or Madonna, and although he had never gained a particular following outside Italy, nothing seemed to stop him.

Gli Spari Sopra (1993), his most ambitious work to date, was recorded with the help of an international cast of musicians, such as drummer Vinnie Colaiuta and Eurythmics' Dave Stewart, and was followed by the rocking Nessun Pericolo...Per Te (1996) and the relatively more intimate Canzoni per Me (1998). His only live appearance of 1998, at Imola's Heineken Jammin' Festival in front of 120,000 fans, can be heard on Rewind (1999). Stupido Hotel (2001) was the first Rossi record after the death by overdose of old friend Massimo Riva -- who, along with Maurizio Solieri, was once again part of his backing band -- and was followed in 2004 by Buoni o Cattivi. To promote its release, Rossi organized a free concert in Catanzaro, attended by 400,000 people. In 2005, Milan's IULM university graduated him honoris causa in communication sciences.

In January 2007 Rossi declared that he's "a bit tired of making albums," preferring to concentrate on one song at a time. Hence the release of the single "Basta Poco," which is backed by a cover of Lucio Battisti's "La Compagnia." ~ Aurelio Pasini, Rovi