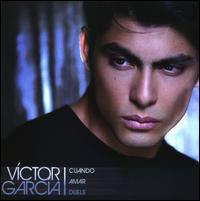 In yet another version of an increasingly familiar success story, Victor García became a superstar via La Academia -- Latin America's American Idol and Big Brother rolled into one -- not by winning, but by being voted off initially, and then being invited back, eventually winning second place in the finals. The prize included a record deal with Sony Records, and the drama generated by his experience in the reality show ensured that Victor García, released in 2003, would be a substantial hit. But, again drawing comparisons with American Idol, García leveraged savvy marketing and his own considerable singing and acting talent to create a viable career that, notwithstanding his second-place status, made him the most familiar Academia artist in North America.

Born in 1975 in the oceanside port/resort of Tampico, Mexico, García had released several albums as the lead singer of Nahum in the latter half of the 1990s by the time he was chosen for the "Academy" in 2002. His eponymous debut album was dominated by Latin pop ballads, but García experimented with a cowboy/norteño image, which was a stroke of originality, given that he was frankly more handsome than Intocable or other front-runners in that style. Perhaps this resonated with Mexican radio programmers up north, because the 2005 follow-up disc, Loco por Ti, included norteño and banda versions as well as regular pop versions of the potential hits. And it was the norteño version of the lead song, "Loco por Ti," that took off in the U.S.A., generating gold status for the album. Arráncame, released in 2006, was not as big a seller, but by then Garcia had an acting career in telenovelas and seemed poised for continued commercial success. A greatest-hits package, Lo Mejor de Mi, was released in 2007. ~ J. Witzgall, Rovi