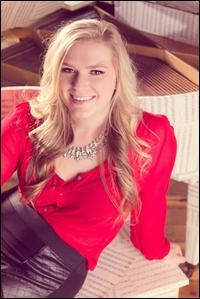 A professional recording artist since the age of 13, Florida-based teen vocal powerhouse Whitney Wolanin -- who began singing as early as age two -- has been a familiar sight on the adult contemporary charts since the release of her debut, Funkology XIII, in the summer of 2005. "It Takes Two," her duet with Survivor lead singer Jimi Jamison from Funkology XIII (which was co-produced by Motown Funk Brother bassist Bob Babbitt), hit number nine on FMQB's AC40 chart, was a number one most added, and spent 20 weeks on the chart. Wolanin's teen empowerment anthem "Good" stayed on the same chart for 47 weeks, hitting number seven. The song was featured on the Eye of the Tiger CD that was sold at the University of Memphis NCAA men's basketball games to help raise money for the team's ill former coach Larry Finch. The collection also featured such Memphis-based greats as Al Green and the Bo-Keys. During the holiday season 2006, her cover of "Frosty the Snowman" from the follow-up release, Christmasology, hit number 11 on Radio & Records' AC chart.

While Wolanin's previous recordings showcased her strengths as an interpreter of outside material, "Loud and Clear" and the other songs she was working on for a multi-track EP release in late 2008 represent her first forays as a songwriter. Turning to a marketing strategy involving various single-track releases, "Loud and Clear" was issued in various versions to DJs to create their own mixes; the extended remix hit number 20 on the record pool charts. Over eight million people heard the radio edit of the same song in movie theaters in 2007 before and after Harry Potter and the Order of the Phoenix. "Loud and Clear" was also licensed by MTV for use and has played on the TV shows The Hills and Newport Harbor; later that year, her version of "Hark the Herald Angels Sing" was broadcast in 140 countries on the EWTN network.

Wolanin has performed live with her band since age 12 as part of her annual Christmasology show, which raises funds for children in need and also helps finance a permanently endowed college scholarship fund called the Rockin' Christmas Fund. In addition to visiting children's hospitals nationwide, the singer has been a spokesperson for Youth Crime Watch of America, helping young people avoid problems on the Internet; her online safety tips are featured in various languages on the YWCA website. A graduate of an international baccalaureate (IB World School) high school, Wolanin was a full-time student as of fall 2008 while continuing her career as a songwriter, recording artist, and live performer. A series of EP releases followed, with Girl in 2009 and Whitney Wolanin 1 in 2011. In 2012 a new single "Honesty" dropped, and was later included with the mini-album Let's Be Honest Part 1. 2013 found Wolanin expanding her online profile with the release of single and video "Wrong Guy (I Did It This Time)". ~ Jonathan Widran, Rovi