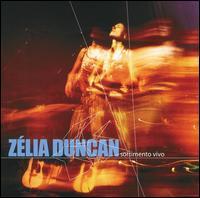 Zélia Duncan is a phenomenon as a high-selling singer/composer and has sold 160,000 copies of her Zélia Duncan album. Since 1994, she has been a major national success, touring through countries of Europe in 1996 and also winning awards from critics in Brazil.

At six, she and her family moved to Brasília, where at 16, she did her first show. In 1981, she sent a tape to the Sala Funarte, a renowned hall in Rio that promoted novice concourses. She won the competition and then did her first professional appearance there. The show was a success and she was granted an invitation to represent Brasília at that year's edition of the Pixinguinha project, in which she toured the Northeast accompanying Cida Moreira and Wagner Tiso. In 1987, she came back to Rio. She then worked as a backing vocalist for singer José Augusto, and was also a DJ for Rádio Fluminense FM ("Maldita"), under the pseudonym Cristina Moreira. In 1987, she performed at the extinct Botanic Bar, still as Zélia Cristina. In 1989, she opened the show Zélia Cristina no Caos, which yielded an invitation from label Eldorado to record her first album, Outra Luz.

Whle she may regret the work now, it did bring her two Prêmio Sharp nominations: Revelation and Best Pop/Rock Singer. The album had the participation of Luiz Melodia. It also opened her up to the opportunity of performing on several TV shows and capitals of Brazil. She was then hired to a five-month contract in Abu Dhabi, Arab Emirates. During that time, she wrote most of her second album's lyrics. Returning to Brazil, she created a band and did a season at the Torre de Babel nightclub. Producer Guto Graça Melo saw the performance and invited her to record in his studio, the tapes from which were never released. Invited by label Lumiar's owner Almir Chediak, she appeared on the Dorival Caymmi's Songbook, interpreting "Sábado em Copacabana." It was when she was invited by producer Beth Araújo (who is now her business partner and manager) to record her second album, Zélia Duncan (her mother's maiden surname, a suggestion of Warner's president in Brazil). Tanita Tikaram's "Cathedral Song" had a version, and "Catedral" was included on a major soap opera soundtrack. Billboard magazine appointed it one of the ten best Latin albums of 1994. In 1995, she performed at Jazzmania in March, did a show at São Paulo's SESC Pompéia, and was invited to the JB FM commemoration at the Metropolitan, where she performed with Adriana Calcanhoto, Cássia Eller, and Maria Bethânia. Also that year, she played at the Tom Brasil hall, being the first woman to do so. She participated on the Tom Jobim and Djavan songbooks, as well. She received the Golden Record for 100,000 copies sold of Zélia Duncan and in May 1996, it reached 140,000 copies. She performed with the Orquestra Jazz Sinfônica, Ed Mota, and Chico César at the Kaiser Bock Winter Festival. The Orquestra invited Duncan to two other performances. In August, she finished the tour commemorating 160,000 copies sold. On Father's Day, she gathered 30,000 people at a live performance in São Paulo. For her next album, the song "Enquanto Durmo" was included on the Salsa e Merengue soap opera before the album was released (which happened in November). Intimidade sold 90,000 copies right in the first month. In 1996, she received the APCA prize as Best Singer. In 1997, she toured for the second time through Portugal and Spain. In May, she participated in the Casa do Samba 2, while touring Brazil. On June 19, she opened a series of five presentations in New York, where she also performed with Lenine and Hermeto Pascoal. She again performed in Portugal and Spain and in September, she did 12 performances in Japan. She appeared in a show in São Paulo for 20,000 people, together with Carlinhos Brown, Alceu Valença, Beth Carvalho, Chico César, Zeca Baleiro, and the Orquestra Jazz Sinfônica. In October 1998, her album Acesso was released and she embarked on a national tour. ~ Alvaro Neder, Rovi